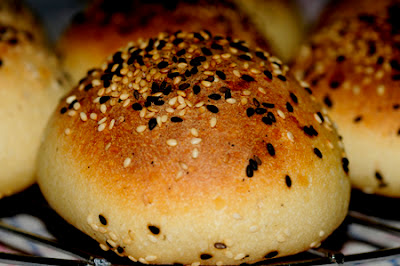 As you might know every month BYOB features a blog. This month our featured blog is Stephanie’s Girl versus Dough. Do you love to have a look at blogs on baking bread? Strolling through their recipes, peeking in their kitchen, learning something new, being surprised by new combinations and getting inspired? I do.
When you see Stephanie’s blog, you get all those things. I did and found good looking Hamburger Buns. I never before made Brioche dough and I love new experiences. My choice was made; I was going for Stephanie’s Seeded Brioche Hamburger Buns. Peter made some delicious hamburgers and they were waiting in the refrigerator. And we also had a ripe avocado. I made a spicy sauce (chili, garlic, onion, pickles, mayonnaise, mustard and ketchup) and we had a nice dinner. Can you taste it already?

The original recipe uses commercial yeast and I try to cut back on this because it’s not good for people with gout. Even though I’m bad with diets, I do try to keep an eye on the amounts of purine I eat. Just because the pain of a gout attack is something I want to avoid.
The other change is that I didn’t made a nice coil, simply because I forgot and I love the feeling the dough gives when you turn them with cupped hands into nice round buns. And I thought 13 gram of sugar was enough. I try to use less sugar.

These buns are really great with hamburgers. The sesame seeds add an extra taste to the bun and they look nice. 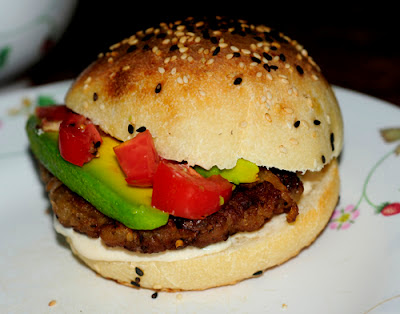 This is what I used:

This is what I did:
Levain:  the evening before (8 - 12 hours) I mixed the ingredients for the levain. I left it in a plastic container with a lid for the night in my kitchen.

Baking day:
The dough: I added all of the ingredients in the mixing bowl of a spiral mixer and mixed until all was well combined. I mixed on first speed for 2 minutes and on second speed for 4 minutes. The dough should be supple and soft, with a high gluten development.

Bulk Fermentation: transfer the dough to a slightly oiled container, cover and leave for 1 hour.
Shaping: I divided the dough into 7 pieces and loosely pre shaped into balls. Covered with a towel and left for 15 minutes to rest. I made balls instead of the coils, simply because I forgot. Secondly because I love the feeling of making beautiful round buns with cupped hands.
Transferred them to the floured linen couche, covered with a moist towel and a plastic bag.

Proofing: I proofed the rolls for 1 hour.

Preparing and Baking: When the oven is hot enough I boil water and pour it in a glass bottle with a long neck. I pour some boiling water on the hot stones and quickly close the oven door to keep the steam in the oven.
I place the loaves on parchment on a peel. Sprinkled black and white sesame seeds over them. Transfered them to the oven and quickly slide the rolls on the baking stone. After some minutes I add some more water to get more steam.

I baked the rolls 8 minutes with steam and quickly removed the parchment paper and the steam pan. I baked the rolls for another 13 minutes. Probably after 15 minutes your rolls are golden brown and done, but in my oven it takes longer.

I send this to Susan’s YeastSpotting and to Bake Your Own Bread
What did you bake this month?