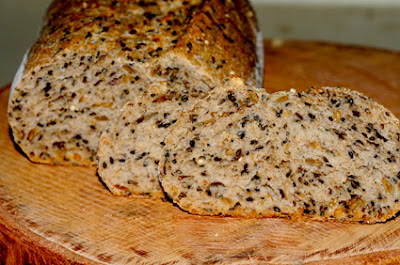 I had stiff levain in the refrigerator and wanted to use black sesame seeds. I was looking for bread to put it in. As you know my latest book had arrived. I found Pain au Levain.

The result is delicious; the crumb is soft, moist and the crust nice crunchy. The loaves disappeared so quickly, we had them for breakfast and our light dinners. Even though the taste of the seeds is noticeably present it goes well with a lot of our favorite spreads like cheese, jam, guacamole, egg, and so on. This one will be back! 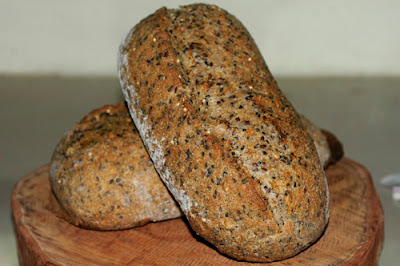 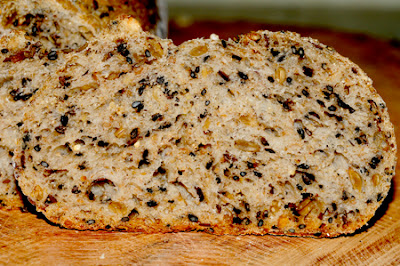 This is what I did:
Stiff Levain:  the evening before (8 - 12 hours) I mixed the ingredients for the levain. I left it in a plastic container with a lid for the night in my kitchen.

Baking day:
The final dough: I added all of the ingredients, except salt and the levain, in the mixing bowl of a spiral mixer and mixed until all was well combined. In the mean time we had breakfast. After 60 minutes I added salt and the levain.
I mixed on second speed for 2 minutes. At the end of mixing time I added the sesame seeds and the sunflower kernels until incorporated. The dough should be supple, with a medium gluten development.

Bulk Fermentation: transfer the dough to a slightly oiled container, cover and leave for 2 – 2.5 hours. Stretch and fold the dough two times at 50-minute intervals.

Shaping: I divided the dough into two pieces and loosely pre shaped into balls. Covered with a towel and left for 15 minutes to rest. I gently but firmly formed them into batards.
Transferred them to the floured linen couche, covered with a moist towel and a plastic bag.

Proofing: I proofed the loaves for 2 – 2.5 hours. Because of the warm/hot temperature in our house I watch them to prevent over proofing.

Preparing and Baking: When the oven is hot enough I boil water and pour it in a glass bottle with a long neck. I pour some boiling water on the hot stones and quickly close the oven door to keep the steam in the oven.
I place the loaves on parchment on a peel. Transfer them to the oven and quickly slide the loaves on the baking stone. After some minutes I add some more water to get more steam.

I send this to Susan’s YeastSpotting and to Bake Your Own Bread
What did you bake this month?