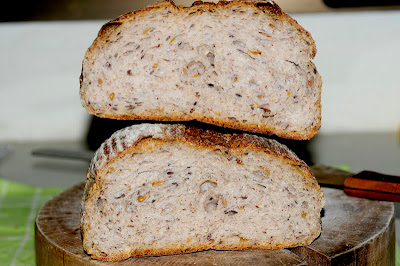 There's a new thing to join; BYOB - Featured Bread Blog. I like the idea of meeting another baker and digging in her or his recipes. This way I can be inspired and learn from them. BYOB chooses the baker and I choose the recipe.

There’s so much Cathy has baked over the years it’s hard to choose a recipe. I wanted to bake with my sourdough starter which made my choice easier. Next steps I took, was looking at titles, ingredients and photos. I try not to judge the bread by the cover (photo) but…. Again it’s difficult because there’re a lot of good looking loaves to choose from. Then I just choose the ingredients I wanted to taste in my bread the next morning for breakfast. This one came out: Seed Bread from Jeffrey Hamelman’s book BREAD.

The other thing I noticed; Cathy takes a lot of pictures during the process of baking bread. I remembered when I was new at baking my own bread this helped me a lot. And, still I like to look at all those photos. Thank you Cathy for sharing so many recipes and photos, and let’s not forget to thank Jeffrey Hamelman. We enjoyed our Sourdough Seed Bread very much. 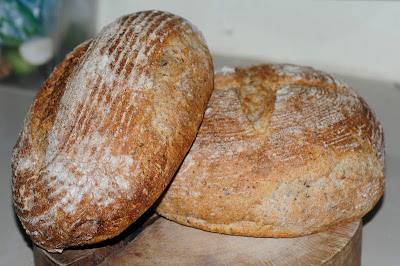 When you taste and smell this bread you want to make it too!

It's adapted from Bread: A Baker’s Book of Techniques and Recipes by Jeffrey Hamelman

Cathy used less sunflower seeds and added a bit more sesame seeds. I used the same amount as Jeffrey Hamelman in his book.

This is what I did:
Liquid Levain:  the evening before (12 to 16 hours) I mixed the ingredients for the liquid levain. I left it in a plastic container with a lid for the night in my kitchen. It’s probably warmer than the adviced 21°C in our house because the next morning after about 10 hours the levain looked like it was fully fed and ready to drop.

Flaxseed Soaker: after the levain I poured 20 grams of flax seed in a plastic container filled with 190 grams of water and closed the lid. I choose to use 20 grams for soaking and the remaining 42 grams I grinded for the final dough the next morning. 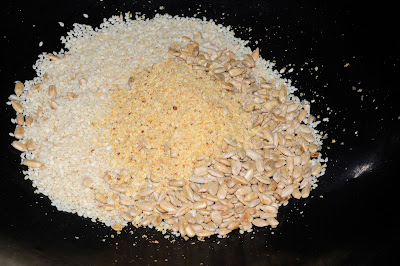 Baking day: first I roasted the sunflower kernels, sesame seeds and some wheat germs until golden. When the seed cooled off I was ready for the final dough.

The final dough: I added all of the ingredients, except salt and the seeds, in the mixing bowl of a spiral mixer and mixed until all was well combined. In the mean time we had breakfast. After 30 – 60 minutes I added salt and the seeds. The flaxseeds float in a kind of gelatin water, that’s normal. I mixed on first speed for 3 minutes and on second speed for another 3 minutes or so. The dough should have moderate gluten development. 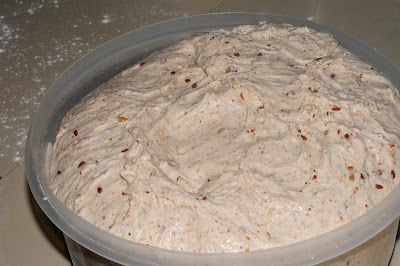 Bulk Fermentation: transfer the dough to a slightly oiled container, cover and leave for 2 1/2 hours. Stretch and fold the dough two times at 50-minute intervals. 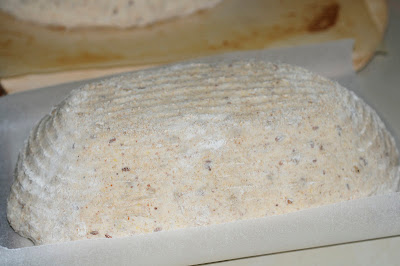 Shaping: I divided it into two pieces and loosely pre shaped into balls. Covered with a towel and left for 15 minutes to rest.
I choose to make one round and one batard shaped loaf. I shaped them firmly but gently. Transfered them in the floured bannetons, covered with a moist towel and place them in a plastic bag.

Proofing: I proofed the loaves for 1,5 hours. Because of the warm/hot temperature in our house I watch them to prevent over proofing. 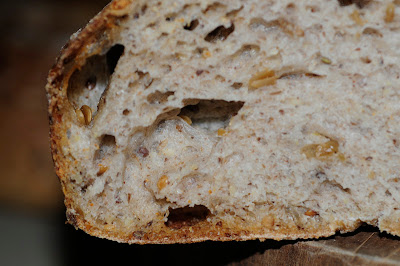