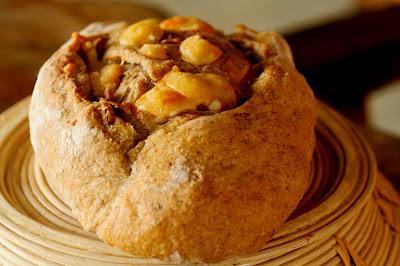 I love to see what other people bake and I’m curious about their stories. A while back I found the blog of Judd of Weekendloafer.  It’s full of great looking breads and Judd’s story is about her beautiful mountain.
I found this mouthwatering bread filled with blue cheese! We have some Dutch cheeses left in the refrigerator, but there’s no French blue cheese in there. I don’t complain, but …. the taste and smell of a nice blue cheese, hmmmm. And tucked in a lovely rye loaf it's  heavenly.
But what can I tuck in my lovely rye loaf? I found a piece of Salami and some Parmesan cheese, which would be very nice too.
The choice was easy; today I bake Parmesan Cheese and Salami Rye Bread. Parmesan and Salami are eaten in Italy but also in France. So, it’s a French bread, n'est-ce pas?

Since this July is the month of Cindystar’s French Bread I will send this loaf to her. Cinzia of Cindystar  is the charming host of Bread Baking Day#52. She came up with a French theme for this month. I already baked a delicious Couronne Bourdelaise for BBD.
Instead of two big loaves I followed Judd and baked four small loaves. I like to shape a loaf and decided to shape these loaves myself instead of using bread pans. The moment I’m writing this post I understand why Judd used the bread pans. Judd scored the loaves before proofing. I didn't. My loaves opened up and the filling almost poured out. It looked very rustic! Or is volcanic eruption a better description? Decide for yourself.
Anyway, the loaves tasted delicious and our house smelled like a baguetterie. Bon appétit! 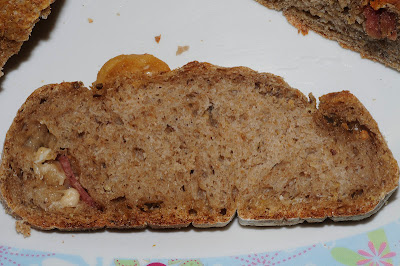 Baking day: a stiff starter is more forgiving than a liquid levain. But still I needed to get started.
The final dough: I added all of the ingredients, except salt and the levain, in the mixing bowl of a spiral mixer and mixed until all was well combined. In the mean time we had breakfast. After 60 minutes I added salt and the levain. Judd wrote about a long autolyse which really helps the gluten develop.


I mixed on first speed for 3 minutes and on second speed for another 3 minutes or so. The dough should have moderate gluten development.

Bulk Fermentation: transfer the dough to a slightly oiled container, cover and leave for 2 1/2 – 3 hours. Stretch and fold the dough two times at 50-minute intervals.

Shaping: I divided into four pieces and loosely pre shaped into balls. Covered with a towel and left for 15 minutes to rest.
I flattened the balls and placed the filling on top. 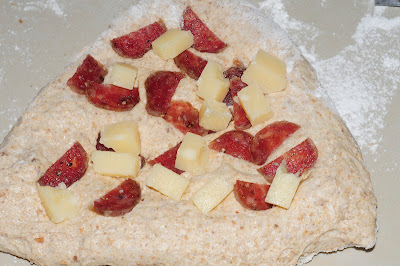 Firmly but gently I rolled the dough tightly to avoid big gaps around the filling.
Judd placed the loaves in baking pans and scored them. I didn’t use pans but scored them anyway. Next time I will score them just before placing them into the oven, because of the filling the top of the loaves busted open during proofing. Even though it gave them a rustic look.

Transferred them to the floured couche, covered with a moist towel and a plastic bag.
Proofing: I proofed the loaves for 1,5 hours. Because of the warm/hot temperature in our house I watch them closely to prevent over proofing.
Pre heating: I pre heated the oven to 230°C and placed the steam pan with stones on the bottom of the oven.

I found the original recipe at Weekendloafer
I send this to Cinzia of CindyStar, host of Bread Baking Day#52, to Susan’s YeastSpotting and to Bake Your Own Bread
Go and check them all out!