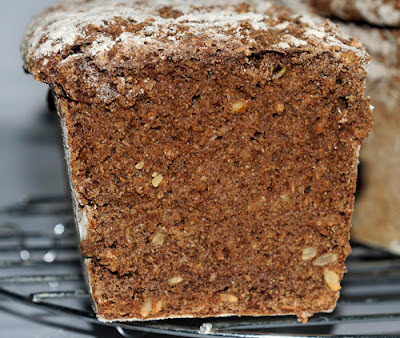 When I was looking for another dark Rye-bread I found Vollkornbrot in Jeffrey Hamelman’s book. Vollkorn means whole meal and he uses Rye meal in this bread. It’s the same as pumpernickel, a coarsely ground rye. I soaked it over night in water before adding it to the rest of the dough.

I don’t use bread pans often, but this time I followed the instructions of Jeffrey Hamelman.
I baked dark Rye bread before and the last time it was Dutch Regales Finnish Rye. It’s a delicious Rye bread we love on our breakfast table. But we weren’t prepared for this Rye bread. It is like the Frisian Rye Bread we used to buy in the Netherlands. Or at least for us it is. This is a 100% Rye Bread. It’s dark, sweet, moist and full of earthen smells.

It’s so delicious with Dutch cheese (Beemster or Old Amsterdam) or with salted fish or with BLT or with homemade jam, or with anything you like on a tasteful slice of bread.

As you might have seen on my blog, we love our Dutch cheeses. Maybe next time when your hand goes out to your usual cheese, stop your hand and have a good look around. Is there Old Amsterdam? Or maybe some mature Beemster? Or cheeses with nettle or clove? Just ask the shopkeeper for a taste of the different Dutch cheeses. I’m sorry to say we are not related to any company or anyone involved in Dutch cheese. I would love to have a family member involved in Dutch or French cheese.

Back to bread. I didn’t have enough Rye meal and had no idea how much Rye flour I needed to get the right amount. I did what I could; I just poured Rye flour until my feeling said it was enough. So I can’t tell you how much Rye flour I used with the small amount of Rye meal. I write here the original recipe. Lucky for us my feeling was right. The loaves turned out delicious. We had enough to share with fellow Dark Rye-lovers. 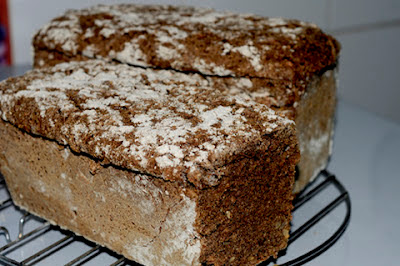 This is what I did:
Levain: the evening before (14 - 16 hours) I mixed the ingredients for the levain. I left it in a plastic container with a lid for the night in my kitchen.

Baking day:
The soaker: pour the cold water over the rye chops, cover with plastic.

Final dough: I added all of the ingredients in the mixing bowl of a spiral mixer and mixed  on first speed for 10 minutes.

Bulk Fermentation: I left the dough in the mixing bowl for 20 minutes, covered with a towel.

Shaping: I divided the dough into two pieces and loosely pre shaped into logs. I slightly oiled and floured the pullman pans before I placed the logs in the pans. Covered with plastic.

Proofing: I proofed the loaves for 50 minutes.

Preparing and Baking: When the oven is hot enough I boil water and pour it in a glass bottle with a long neck. I pour some boiling water on the hot stones and quickly close the oven door to keep the steam in the oven.
I place the loaves on the baking stone.  I baked the loaves for 15 minutes on 250°C and then lowered the temperature to 210°C for 75 minutes.

Cooling:Jeffrey Hamelman suggests to leave the loaves in baker's linen for at least 24 to 48 hours before slicing.

This is what we had for breakfast the next morning. 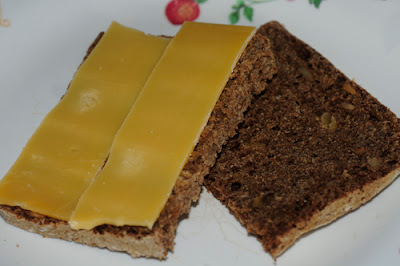 I send this to Susan’s YeastSpotting and to Bake Your Own Bread
What did you bake this month?  Don’t forget to show it.