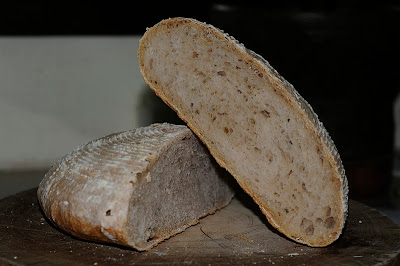 We needed beer to make ‘appelbeignets’ for our New Year’s Eve. And I remembered a recipe for bread with beer. So, why not use the beer in both?
My sourdough is verry active; it doesn’t need much to bubble even though it’s winter over here. The beer we found is a local lager beer. Fennel we found at the market and Rosemary in our garden. I always pound the herbs in my mortar before adding it to the dough; this brings out the nice flavors.
One of the bakers at the 4th anniversary of Bread Baking Day, Fabrice made a bread with beer. As soon as I opened the can of beer, the smell of lager filled the house. Peter, who was at least 8 meters away from the kitchen, smelled it instantly. Dark beer or  white beer would have smelled nice, this didn't. But this beer is what I found in our village  shop. 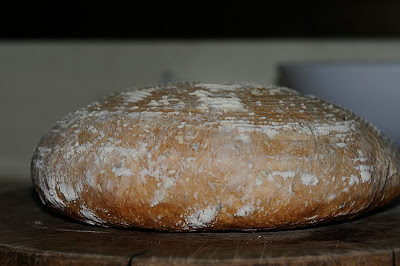 When the bread was done, there was no distinct smell of beer or herbs. But, when I cut the bread open the flavors game out. Not too strong; but nice and mild. The beer gave the bread a fresh taste. The fennel tasted nice like fennel. But, every time I use rosemary in dough something happens; maybe because of the retard proofing the rosemary smells a bit like perfume. It's not bad, but strange when you take a bite. I was happy with the crumb. The crust could be thicker. Overall: a nice bread with a good flavor.


This is what I used:
sponge:
120 gr 100% hydration sourdough starter
60 gr all purpose flour
45 ml lager beer
Final dough:
235 gr all purpose flour
65 ml lager beer
40 ml lukewarm water
1 tsp salt
1 tsp fennel seeds, pounded
1 tsp fresh rosemary, chopped and pounded
This is what I did:
4 – 6 hours before you want to make this bread, you prepare the sponge. I mixed the starter with the beer and added the flour. Cover with plastic and leave at a warm place.
As soon as the sponge is active and full of bubbles you can mix the rest of the ingredients, except for the salt and the herbs. Mix 5 minutes and than add the salt and the herbs. Mix another 5 minutes until you have a medium dough consistency.
Transfer to a lightly oiled bowl. Cover with plastic and leave to rise for one hour or until it doubled in size.
Gently shape the dough into a loose ball. Cover with a towel and leave for 10 minutes to rest. I placed the bowl in a floured banneton and placed it in a big plastic bag. Leave to proof for 1.5 hours or until it is done.
I choose to proof it for 1 hour and the rest in the refrigerator during the night.
The next morning I took the banneton out of the refrigerator to warm up, during this time I pre heated the oven to 250°C with my steam pan with hot stones.
I decided not to score the loaf. I place the loaf on parchment paper on my peel and placed the loaf in the oven. Quickly I poured boiling water in the pan with hot stones and closed the oven door. I baked the bread for 12 minutes with steam and 25 minutes without.
When the bread is done and has a nice golden brown color place it on a wire rack to cool.
I send this to Susan’s YeastSpotting and Heather of Bake Your Own Bread