Best Baguette of 2013 by Ridha Khadher 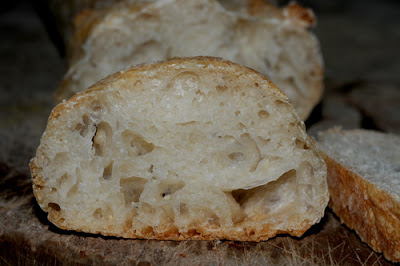 Peter’s birthday is coming up soon. He doesn’t want presents, a party or surprises. He’s really happy when I bake good baguettes to join his favorite birthday meal. Since he’s a young boy he loves to eat vegetable soup with baguette and French cheeses on his birthday. 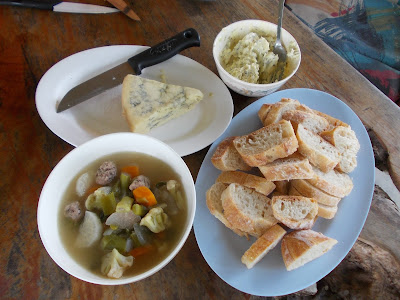 Stefanie of Hefe und Mehr was able to build the recipe based on the rough information mr. Khadher gave in an interview. He uses nearly ice cold water, kneads his dough more and uses a long (24 hour) and cold (refrigerator) fermentation. I just followed Stefanie’s recipe and I’m lucky I did. It’s a delicious baguette. Of course there are more delicious tasting and smelling baguettes. But, this one is also very easy. The most difficult part for me is shaping baguette without destroying the bubbles. I’m still working very gently on that part.

Thanks Stefanie for building a recipe for us to work with. 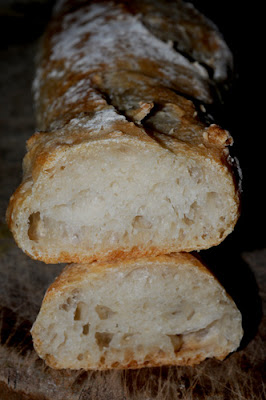 This is what I did:
I placed all ingredients, except yeast and salt, in a big plastic bowl with lid. With my hands I mixed until all ingredients were combined and left for a 45 minutes autolyse. I added the yeast and salt, mixed for 8 minutes by hand.
After a 20 minutes rest I folded it from the outside of bowl into the middle for three or four times. I let it rest for 20 minutes again, then folded the dough again.

Bulk Fermentation: I placed the lid on the bowl and left it to ferment for 24 hour in the refrigerator.

The next morning I pre heated the oven.

Shaping: I divided the dough into pieces of 200 grams and pre shaped into squares. I let it rest for 20 minutes. Then I rolled them gently into baguettes of 30 cm.

Proofing: I proofed the baguettes for 35 minutes on a couch.

Pre heating: I pre heated the oven to 230°C and prepared for steam.

I send this to Susan’s YeastSpotting