It’s avocado time and beside a lot of delicious recipes with avocado we can’t get enough of guacamole or just eating it out of the skin with some honey. And what goes well with guacamole? Yes, flatbread. So, you can imagine I loved the theme Elisabeth came up with for Bread Baking Babes of this month; Persian Flatbread also known as Nan e Barberi. 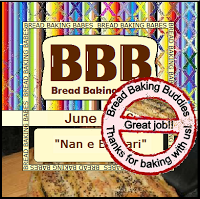 When I saw the photo of the Nan e Barberi the thought of garlic came to my mind. Wouldn’t it be even more delicious with bits of crunchy garlic and sesame seeds?

I had to add a bit more flour than the recipe calls for during mixing. I buy unbleached wheat flour from Germany and it’s known to use less water that American flour. I left the recipe as I found it at Elisabeth’s blog for other home bakers to follow.

It’s an easy recipe as long as you can accept the slack dough. I have to admit I had to control myself and added just a bit of extra flour during mixing to give it more strength. It worked well. The dough rose very well. When I poured it out of the mixing bowl I left it as it was. In fact I can say I have a non-shaped flatbread. The difficult part was when I poured the dough onto my floured work counter and had to transfer it to the floured parchment paper.

The monsoon pours heavily so I have to put Nan in the oven just before we eat it.The result is delicious. The crumb is full of air and the crust is deliciously topped with crunchy garlic and black and white sesame seeds. Even with the rain we’ll eat outdoors. The rain blocks the view, but there’s enough to see up close. Of course there’s the Nan e Barberi with avocado. And there the Koi’s and turtles eating together in the pond, the birds and butterflies in the garden are hiding from the rain and the snails and earth worms coming out of the rain onto the terrace. Then there’s the fresh smell of water in the air and the sound of all the frogs in the pond sounding almost as loud as the pouring rain. The sky looks grey, but there’s always a bit of blue in the far distant even if you can't see it.

And the best part is Peter’s smile when he finishes the last piece of Nan and he says: ‘and again delicious bread on our table’. 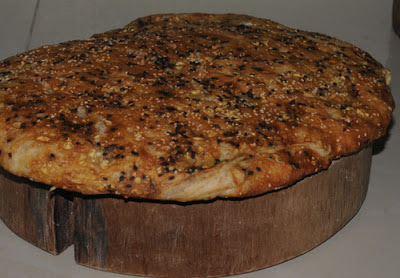 Bulk Fermentation: I left the dough in the mixing bowl, covered for 1  hour. 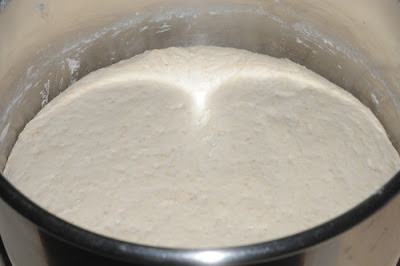 The sauce: whisk flour, baking soda and water in a small pot, bring to a boil and remove from heat to cool.

Shaping: Dust parchment paper with flour and gently place the dough on top. I decided to make one big loaf instead of two smaller ones. The shape of the dough as it came out of the mixing bowl was just right. I left it like that. 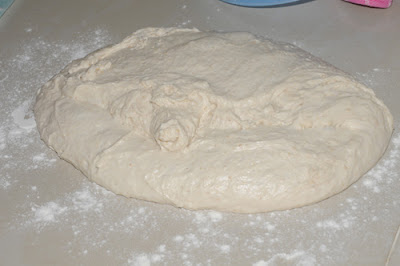 Instead of waiting for one hour I poured the sauce on the dough and sprinkled the seeds and garlic on top. 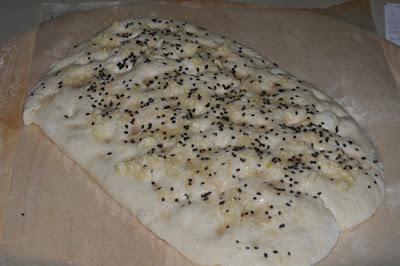 Proofing: I covered it and let it proof for 1 hour.

Pre heating: I pre heated the oven to 230°C and prepared for steaming.

Preparing and Baking: When the oven is hot enough I boil water and pour it in a glass bottle with a long neck. I pour some boiling water on the hot stones and quickly close the oven door to keep the steam in the oven.
Transfer the loaf to the oven and quickly slide the loaf on the baking stone. After some minutes I add some more water to get more steam.
I baked the loaf 10 minutes with steam and quickly removed the parchment paper and the steam pan. I baked the loaf for another 15 minutes. Bake the loaf until it is dark brown colored.

I send this to Elisabeth’s Blog of Our Kitchen, host for this month’s Bread Baking Babes
and to Susan’s weekly showcase of home baked artisan breads YeastSpotting