It’s the second week of April and everybody is preparing for the big Songkran celebration.

The Songkran festival (สงกรานต์) from the Sanskrit word saṃkrānti, or literally "astrological passage") is celebrated in Thailand as the traditional New Year's Day from 13 to 16 April. It coincides with the New Year of many calendars of South and Southeast Asia.
Songkran has traditionally been celebrated as the Thai New Year for many centuries, and is believed to have been adapted from an Indian festival. It is now observed nationwide, even in the far south. However, the most famous Songkran celebrations are still in the northern city of Chiang Mai, where it continues for six days and even longer. It has also become a party for foreigners and an additional reason for many to visit Thailand for immersion in another culture.
The traditional way of celebrating, is pouring some scented flower water of the hands of the elderly people. It symbolizes the washing away of troubles and worries of the old year. And the old people give their blessings to the younger ones. Nowadays you can’t cross the street without a few buckets of water over your head.
The mother of one of our Thai friends, Jaai Deng (meaning Red Grandmother), lives in Bangkok at the moment and we cannot visit her this year. Jaai Deng loves good bread and our pizza. The last time we visited Bangkok she even called before and asked me to bake her some bread. We decided to send the bread by postal mail for Songkran.

A while back I baked this delicious Essential Columbia which is filled with different flours and has a great smell and taste. This is the loaf of bread I want to bake for Jaai Deng to celebrate the astrological passage. Instead of pouring some flower scented water we send her flour scented bread. 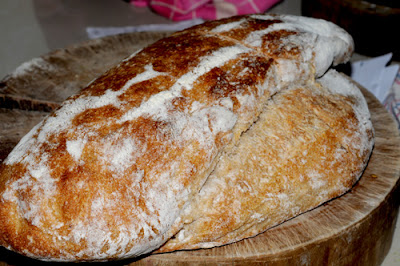 Yesterday evening we heard the bread had arrived and Jaai Deng loves it. Since I baked two loaves we can enjoy it together and share the celebration even though we are almost 1000 km apart. This beautiful world is like a big house full of rooms, you just have to open a door or window to see the ones you love.

This is what I did:
The night before I prepared the levain by mixing all ingredients in a plastic bowl, covering with plastic and leave to ferment for the night (8 – 12 hours).

Combine all flours, roasted malt, diastatic malt and wheat germ in the mixer bowl. Add the water and knead for 2 minutes until all is combined. Cover and leave to rest (autolyse) for 20-30 minutes.
Add the levain and salt and knead in mixer at low speed for about 5 minutes until very smooth.
The dough should feel smooth, dry and firm at end of kneading.

Bulk Fermentation: Transfer the dough to a lightly oiled bowl, cover and leave to ferment for 3 to 5 hours. After 1 hour gently stretch and fold twice to give the dough more strength.

Shaping: Place the dough on your floured work counter. Lightly shape the 2 pieces into boules. Cover with plastic and let rest for 10-15 min. to relax the gluten.

Proofing: I proofed the loaf for 90 minutes.

Pre heating: I pre heated the oven to 230°C and prepared for steam.

Preparing and Baking: When the oven is hot enough I boil water and pour it in a glass bottle with a long neck. I pour some boiling water on the hot stones and quickly close the oven door to keep the steam in the oven.
I place the loaves on parchment on a peel and scored one with one slash lengthwise. I accidently folded the other loaf to fit on the parchment paper. Transfer to the oven and quickly slide the loaf on the baking stone. After some minutes I add some more water to get more steam.

I baked the loaf 10 minutes with steam and quickly removed the parchment paper and the steam pan. I baked the loaf for another 25 minutes. Bake the loaf until it is dark brown colored. I gave the biggest loaf another 5 minutes.

I send this to Susan’s YeastSpotting, a great showcase of artisan baked breads. Have a look for yourself.