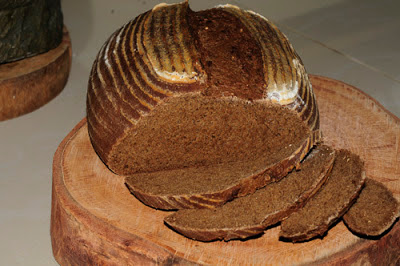 This is what I did:
The dough: I added all of the ingredients in the mixing bowl of a spiral mixer and mixed until all was well combined, for 3 minutes.
Then I mixed on third speed for 3 minutes. The dough was sticky and firm.

Bulk Fermentation: transfer the dough to a slightly oiled container, cover and leave for 40 - 50 minutes. 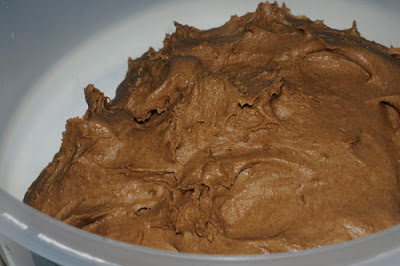 The dough looks a bit like putty, but don't let this fool you.

Shaping: I pre shaped the dough into a ball. Covered with a towel and left for 15 minutes to rest. Then I shaped it into a batard. With the seam up placed in the flour dusted banneton.
If you have, use a banneton that fits the amount of dough. Mine is too full as you can see. This is the only one I have and I'm happy with it. 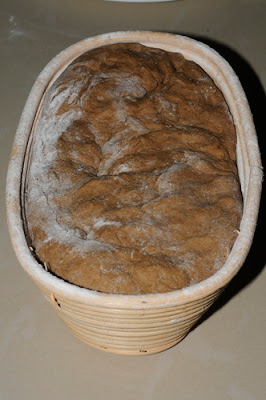 Proofing: I proofed the loaf for 60 minutes. 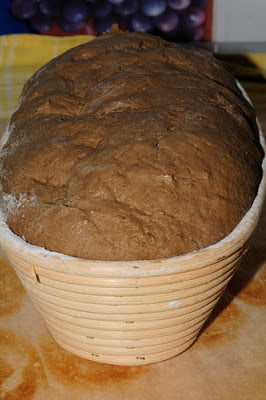 Pre heating: I pre heated the oven to 230°C and placed the cake pan with stones on the bottom of the oven for steaming. In the original recipe you drop the temperature to 190°C and bake it for 40 – 45 minutes and without steam. In my oven it's very difficult to adjust the temperature. I decided to bake the loaf at 230°C and use steam for 10 minutes and bake without steam for 20 minutes.

Preparing and Baking: When the oven is hot enough I boil water and pour it in a glass bottle with a long neck. I pour some boiling water on the hot stones and quickly close the oven door to keep the steam in the oven.
I place the loaf on parchment on a peel and scored it with one slash lengthwise. Transfer to the oven and quickly slide the loaf on the baking stone. After some minutes I add some more water to get more steam.
I baked the loaf 10 minutes with steam and quickly removed the parchment paper and the steam pan. I baked the loaf for another 20 minutes. Bake the loaf until it is dark brown colored.

I send this to Susan’s YeastSpotting and to BYOB