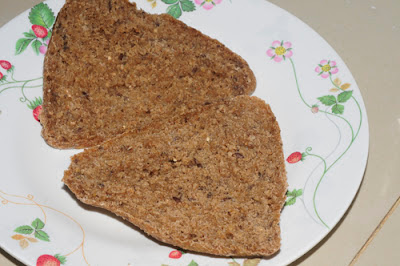 I’m happy BYOB choose Stefanie’s Hefe und Mehr for our Featured Blog. I’m a regular visitor of Stefanie’s blog. She has a long list of bread and treats to choose from. And her explanations are clear and helpful. Even though I haven’t seen everything she has baked, I know what I will bake today: Flaxseed triangles.

Tomorrow we have to go to Chiang Mai, a 3 hours drive and we need to be in the car very early. Peter loves to eat jog; a soft rice soup with coriander, pepper, ginger and crunchy noodles. Normally they add a raw egg and some restaurants have a selection of pork balls, fish, shrimp or pork intestines. Peter loves it with a raw egg and intestines. I normally stick with the fish. On the way to Chiang Mai we pass his favorite jog restaurant, but because it’s closed at this early hour I will bake the Flaxseed Triangles for our car breakfast.

The original recipe of Stefanie’s Flaxseed Triangles is for 3 Breads of 600g each. Even though the big loaves look delicious, I thought small triangles were more convenient for the car ride. I divided the amounts by half and I changed the recipe a bit. I try to replace yeast for sourdough starter because of my gout. And I grinded some of the flaxseeds coarse and added some multi grain to boiling water because I didn’t have enough flaxseed. I was very happy with the result of these mixed seeds and grains. The last thing I did was adding some roasted malt; it gives the bread a nice dark brown color without the sweet taste of molasses.

Thanks Stefanie for these delicious triangles. We had them with Dutch cheese, a real treat. 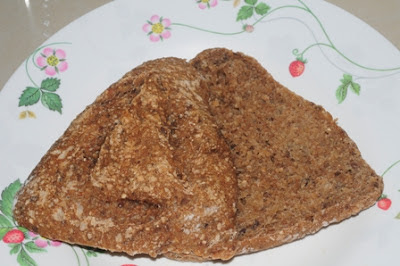 I hope you will visit Stefanie’s blog and bake from her long list of recipes. Send your post  to BYOB and help us to fill the breadbasket of August and the basket of the featured blog.

This is what I did:
Poolish:  the evening before (12 hours) I mixed the ingredients for the poolish. I left it in a plastic container with a lid for the night in my kitchen.

Baking day: soak the flaxseed and multi grain in boiling water and leave for 1 hour to cool.

Bulk Fermentation: transfer the dough to a slightly oiled container, cover and leave for 1 hour.


Shaping: I divided into 9 pieces and loosely pre shaped into balls. Covered with a towel and left for 15 minutes to rest.
To form triangles I flattened the balls and as Stefanie wrote: forming a higher triangle in the middle with “wings” attached to the triangle. Fold the “wings” into the middle so that a triangle is formed. Shape the edges of the triangle to sharp points. Then turn the loaves seam side down. 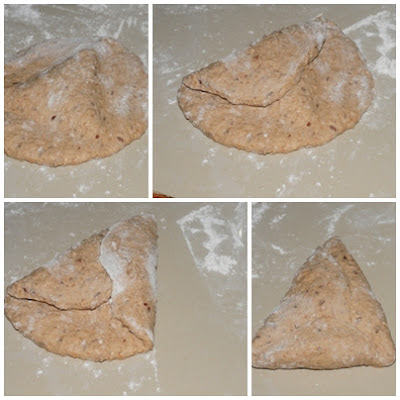 I transferred them to the floured couche, covered with a moist towel and a plastic bag. 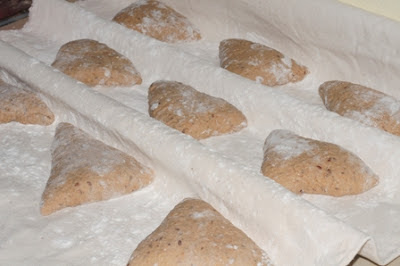 Proofing: I proofed the triangles for 1 hour. Because of the warm/hot temperature in our house I watch them to prevent over proofing.

Preparing and Baking: When the oven is hot enough I boil water and pour it in a glass bottle with a long neck. I pour some boiling water on the hot stones and quickly close the oven door to keep the steam in the oven.
I place the triangles on parchment on a peel and scored them with a triangle. Transfer them to the oven and quickly slide the loaves on the baking stone. After some minutes I add some more water to get more steam.
I baked the loaves 10 minutes with steam and quickly removed the parchment paper and the steam pan. I baked them for another 20 minutes. Bake them until they are nicely brown colored.

Cooling: Let the triangles cool completely on a wire rack.