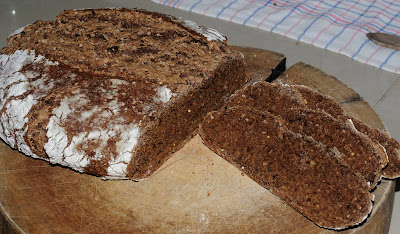 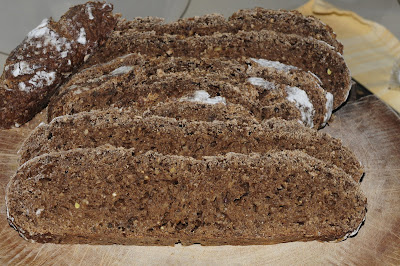 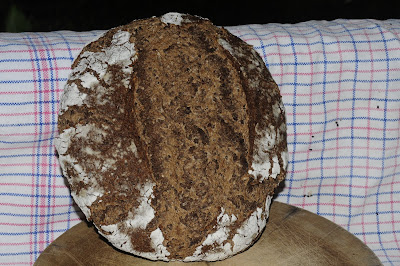 This is what I did:
In a stand mixer I mixed all ingredients on low speed with the paddle for 5 minutes.
It was sticky and wet brown dough. I covered the bowl with plastic wrap and let it rest for 30 minutes. In the bowl I folded the dough onto itself a few times and placed the dough in my biggest round banneton. I had floured the linen heavily. I let it proof for 2 hours and had to leave the house for a few hours. It was hot in the kitchen and I decided to place the dough in the refrigerator for the night.
The next morning take the dough out of the oven and left on the counter while the oven pre heat at 240˚C. I also prepared for steam and placed a pan with hot stones.
Just before placing the dough on the baking stone I boiled 2 cups of hot water and poured this on the hot stones when the dough was in the oven. I baked it 15 minutes with steam at 230˚C and 40 minutes at 200˚C without.
But this evening we had Peter’s lentil soup and it called for this dark rye. We carefully sliced some off. After one bite Peter said; ‘Can you make this again? Because now I don’t need to take Friesian Dark Rye back, when we visit ’ Of course I can. Thanks Alan.
I found this at the Fresh Loaf, baked by Alan
I send this to YeastSpotting and BYOB