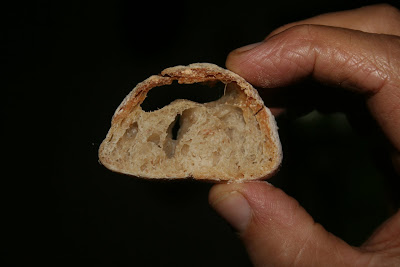 This week we visited friends who have a monkey sanctuary. This couple, she’s Australian and he’s Japanese, take care of a lot of Macaque monkeys with the help of their 3 adopted Thai Lahu sons. It’s a lot of work and the monkeys eat a lot of fruit. So, when our papaya-trees are loaded with fruit, we bring them as much as we can.

Our friends like to eat artisan bread. When they heard about our breads, they loved to try and bake them too. I gave them recipes. I wanted to give them a recipe for baguette. But, making baguette takes a lot of time, so I picked the best one I had tried before. Recently they told us how happy they were with the baguettes they made.
I was surprised they had really made it, because it is 5 pages of instruction and a lot of work. But, I was also happy they liked it. I told them I would look for more recipes on baguettes. But, before I can give a recipe to them, I have to try it for myself. Then I can say if this one is more delicious then the one “Parisian people eat daily”.


I made a French onion soup and this asked for a good baguette. 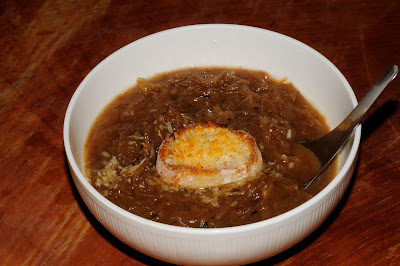 David of Thefreshloaf made these, and they look delicious. I will give it a try. I am baking bread for about half a year now and I see I’m learning and improving. Most loaves look and taste like they should. And there is always next time, right?

I’m really happy with this Pan Francese, it looks great, smells great and taste great. So, you might think ‘that’s that’. Yes, I’m happy with this baguette, but when I look at the photos David posted with his Pan francese, I would like to see these big holes in my Pan Francese. I asked him how he did it. He replied “if you shaped the loaves as you would French baguettes, you probably de-gassed the dough too much. These loaves are meant to be simply cut off the mass of dough and stretched to shape ... gently. …..”. I can do this, so this week I made them again. I didn't de-gassed them, the dough was full of gas. I didn't shaped them, I just stretched them. 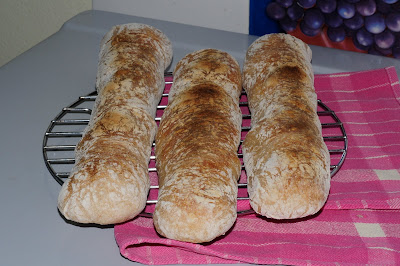 It works they look nice and tasted great. The crust was amazing and the crumb was moist. This one stays on my list of favorite baguettes. But... Yes, next time I will bake them with just all purpose flour. I use whole wheat bran, because I don't have whole wheat flour. The bran has a bigger influence on the amount of water and the dough and probably on the holes, than whole wheat flour does. 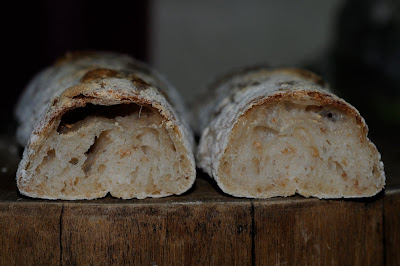 What can I say about making this baguette? Michael Suas uses a 76% hydration and this looks a bit like the Sourdough Ciabattas I made recently. And that was the first time I ever used such wet dough.
This Pan Francese-dough looked like it was difficult to handle, because the dough was so wet and sticky. But this time everything went as it should. I took the dough out of the bowl to fold on the well-floured counter. I wetted my hands and slid them under the dough and lifted and stretched the dough, very gently. It was full of gas. I left all the gas in the dough. David wrote to de-gas the dough at this point. But, I couldn’t. I was too happy with all the bubbles.
I have no bench knife and use two regular sharp knifes and work in the opposite direction, this works for me.

This is what I used:

This is what I did:
The day before baking day I prepared the poolish:
Mix all ingredients in a bowl, cover and leave to ferment for 12 – 16 hours, depending on the temperature. David suggests 18 C. On baking day mix all ingredients in the mixer. Use the paddle during the first 1 – 2 minutes, till everything is well mixed. Change to the hook and mix for 5 minutes at speed 2 – 3. The dough will not clear the sides of the bowl. It looks like a thick and sticky batter. Don’t add flour.

Transfer the dough to a lightly oiled bowl, cover and let it ferment for about 3 hours. Because of the high temperature in our house it took around 2 hours.
Normally I leave the dough in the bowl and scoop it onto itself to make the folds, but this time I followed all David’s instructions. I took the dough out of the bowl and placed it gently on a well-floured counter. I wetted my hands and folded it onto itself like an envelope (I never saw such a wet envelope before). I did this 3 times during bulk fermentation.

Pre-heat the oven and the baking stone at 260 C and prepare for steaming.

Place the dough gently on the well-floured counter. 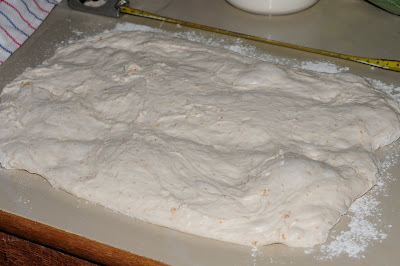 (David says to de-gas the dough, I didn’t). Gently stretch the dough into a rectangle of the size of your baking stone, keeping the gas in the dough. (David makes a smaller rectangle and after cutting he stretches the dough some more, this works better. I had to push the baguettes back because they were bigger than my baking stone). Mine is 35 x 25 cm. Dust some flour on the dough. Make 3 strips with a bench knife. I used 2 sharp knifes in the opposite direction. 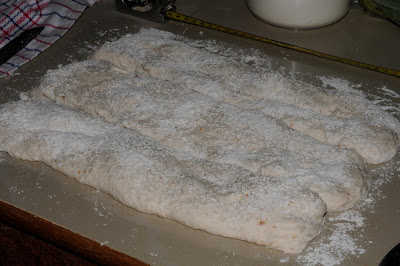 Carefully transfer the strips to the well-floured tea towel or linen couch or parchment paper, what ever you have and works for you. Cover with a towel. 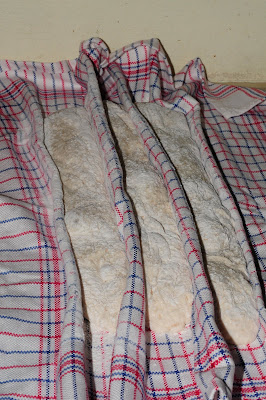 Proof for 30 – 45 minutes, or till the imprint of your finger slowly comes back. 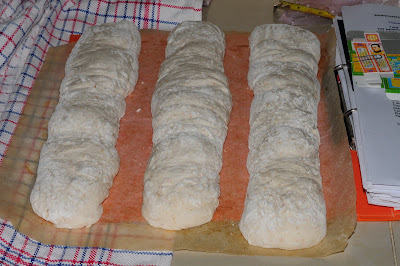 Cool on a wire rack before you slice them.

I found this recipe, made by David, at The Freshloaf
I will send these to Yeastspotting
A special thanks goes to Peter, my husband, who helped me eat all the baguettes in time to find the right slice with enough holes for the picture. "Live is too important to take seriously" Chade Meng