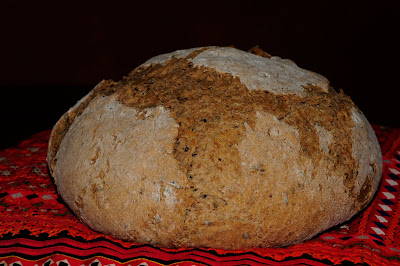 I found this recipe on the website of King Arthur Flour. Jeffrey Hamelman says “This is interesting bread, not for everyone. I made it every Friday for many a year. It uses up leftover bread, which gives the new bread a richness of flavor”
When I read “… not for everyone”, I thought ‘let’s try it’. I like a challenge and it was. Not because of the recipe but because of the result. We really love dark brown bread, but this Russian black bread was too sour and too firm for our taste.

I divided the amounts of the original recipe by 3. Still I had a medium loaf. I used whole wheat bran in stead of the rye flour in the dough. So, maybe I must call this bread 'almost Black Russian Bread'?


It takes 2 days before you have bread on the table, because the slurry and sourdough need to be kept in the refrigerator for about 16 hours or overnight.

In this blog you’ll find the original recipe by Jeffrey Hamelman. 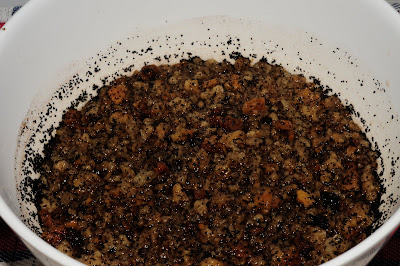 *Slice 3 or 4 pieces (1.5) of bread, about 113 gr (40) fresh. Bake on a cookie sheet in a moderate oven, turning the pieces from time to time, until the bread is very dark, "just this side of carbon." This can take up to and more than an hour, depending on the moisture in the bread. Break the bread into pieces, sprinkle with the ground coffee, and pour the boiling water over it. Mix it all up so the bread is good and wet. Cover tightly and let sit overnight. 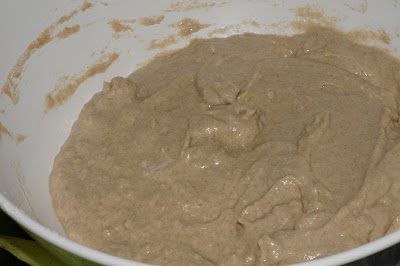 Mix the water, rye flour and stiff sourdough together in a non-reactive, medium-sized mixing bowl, and let the mixture sit overnight, preferably for about 16 hours, at a temperature of about 18°C.

Put the slurry in a blender or food processor and blend until the bread is fairly well pulverized. Scoop this into a mixing bowl or the bowl of a stand mixer; add the sourdough mixture, oil, salt, yeast, and the flours. Mix until well-blended then let the dough rest for about 20 minutes. Continue kneading and mixing—by hand or mixer—until the dough is well-developed. Because of the high percentage of rye flour in this dough, it'll never become smooth and elastic, as all-wheat dough would; just knead it for 8 to 10 minutes, doing the best you can.

Place the dough in a greased mixing bowl, cover the bowl, and let it rise until you can leave a fingerprint in it. This will probably take around an hour. Turn it out onto a floured board, and divide it into two pieces. Shape these pieces into rough rounds, and let them rest for 5 minutes. Shape into firm rounds, trying to form tight, seamless balls, and place the loaves on a piece of parchment. Cover them, and let them rise until they're about two-thirds of the way to doubled in bulk, about 45 minutes.

Preheat your oven to 230°C. To slash the surface of the dough, make one cut across the center, or a cross. Stay away from the "shoulders," or edges. Repeat with the other loaf. Thoroughly mist the surface of both loaves with water until they're quite wet, sprinkle with seeds if you wish and, by sliding a peel under the parchment, slip the loaves onto the preheated baking stone.

Bake the bread for 30 minutes, reduce the oven heat to 200°C, and continue baking for a further 10 to 20 minutes. When the bread is done, the temperature at the center should register about 93°C. Remove the bread from the oven, and cool it on a wire rack. 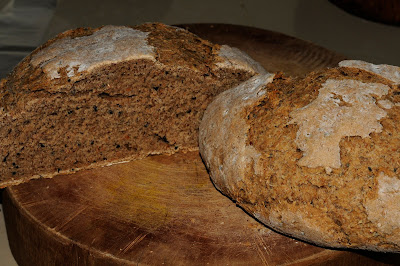