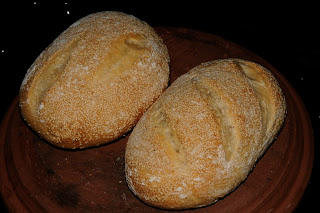 Crusty, crunchy and chewy are things we like in our bread. And once in a while we ate soft bread. Until today, because this soft semolina sourdough is delicious; it is soft and tasteful. And, you need a lot of sourdough starter. Using it is better than discarding it, I think. I’m still working on bigger (sourdough) holes, but around the holes this bread tastes delicious. 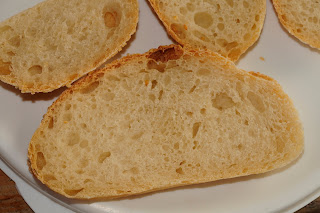 When I was following the recipe I added 60 grams of olive oil. There was a slight doubt about the amount, but the Susan’s recipes are great. A second after I poured the olive oil in the mixing bowl and I saw the oily wet stuff, doubt came back. I removed as much as I could. I think I removed about 30 grams of oil. It incorporated, but it took time.

Wanting to know for the next time I asked Susan on her blog and she said: ‘Connie, if you liked the bread with only 30 g of oil, continue to do it that way! The 60 g will incorporate eventually and will yield a softer crust and crumb than half that amount does, but if you get a result you’re happy with, of course you don’t need the additional oil’ 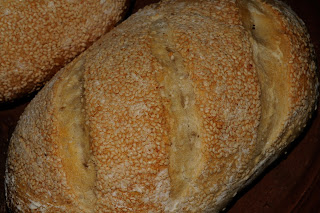 This is what I did:
In the bowl of a stand mixer fitted with a dough hook, combine the flour, semolina, salt, starter, and most of the water. Mix on low speed until the ingredients are well incorporated. Adjust the water as needed to achieve a medium-soft dough.

Continue mixing to a low-medium level of gluten development. Then add the olive oil and mix just until it is incorporated.

Transfer the dough to a lightly oiled container. Cover and ferment for 4 hours, with folds after the first and second hours.

Turn the dough into a lightly floured counter and divide it in half. Preshape it into balls and let rest, covered, for 20 minutes.

Shape the dough into batards. Roll the tops and sides on a wet towel and then in your seed mixture to coat. Place them, seeded side up, on a lightly floured couche.
Proof, covered, for 2.5 – 3 hours, until the indentation left by a fingertip springs back very slowly.

Meanwhile, preheat the oven, with baking stone, to 240 C. You will also need steam during the initial phase of baking, so prepare for this now.

Just before baking, slash the loaves as you like. I saw a picture of a lame, it is a razor blade on a handle. So you can use one corner of the blade and make a straight cut. When I saw the picture I thought ‘I can make this by myself’, and I did. 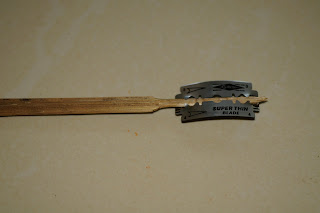 I used a thin razor blade and a piece of bamboo from our garden; very cheap!

Once the loaves are in the oven, reduce the temperature to 230 C. Bake for 8 minutes with steam, and another 25 minutes or so without steam. Then turn off the oven and leave the loaves in for another 10 minutes, with the door ajar.

Cool on a wire rack.

Found at Wild Yeast
I will send this bread to Yeastspotting